A Brief History of Headrest

A Brief History of Headrest

By Hill Anderson – Founder and Trustee

1969 was the summer of Woodstock and a man on the moon. The counterculture was peaking. We were all sure human society was about to change for the better, that this was the beginning of a kinder and more communal world. In the spring of 1970 Nixon illegally and secretly bombed Cambodia. Kent State students were killed by the Ohio National Guard for demonstrating against Nixon’s actions, and most colleges closed for the season “on strike” in protest. Dartmouth president John Kemeny suspended classes for the rest of the year on May 4th.

It was in this atmosphere that the group that was to become HEADREST began to form. At Woodstock a commune called “The Hog Farm” opened a tent to treat comrades who were having “bad trips, ” typically as a consequence of having taken some bad LSD. As with other centers sprouting up across the country, HEADREST took its idea from the Hog Farm, a place where our “brothers and sisters” in the counterculture who were experimenting with drugs could find a friendly ally to “talk them down”, as opposed to being confronted by a disapproving emergency room physician with a hypodermic full of Thorazine, possibly accompanied by an officer.

This was also a time when the counterculture was leading a trend toward being more open with feelings, more honest interpersonally, more fearless in “telling it like it is” in relationships. Such openness at times meant more confrontation and at times led to more tender vulnerabilities among people. Encounter groups were in their heyday on the West Coast. In the organization of HEADREST we had a very strong value and practice of proceeding in open and honest groups and meetings.

Every Sunday night there was an open meeting in the old Dartmouth Christian Union lounge (where Collis is now) where anyone could speak their mind about HEADREST and its operation. Many weekends we had retreats at the home of Elizabeth Gay MSW, one of our most staunch allies, in her rural Vermont farmhouse, in order to grow as a staff interpersonally. 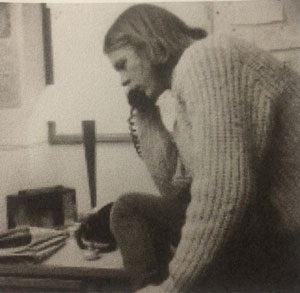 But perhaps I skip ahead. In the summer of 1970, I constructed a proposal for a hotline and referral service for both the Dartmouth community and the general public, in hopes of reaching those in need of help who were not likely or knowledgeable enough to use the traditional services. I wanted consultation and backup from mental health professionals, so my first stop was with the chairman of the Department of Psychiatry at the time, Peter Whybrow. While I was waiting to see him I discussed the venture with his administrative assistant Dereka Smith and she became the first HEADREST member to sign up. Peter liked the idea and approved of my continued planning with Bud King, a psychologist at Dartmouth’scounseling center “Dick’s House”, psychologist Chuck Culver and social worker Elizabeth Gay both of the Psychiatry department. Chuck and Elizabeth were also skilled group leaders.

Then began the Sunday night public meetings and the groups began to swell. Other original members I can remember right now were Mitch Wallerstein (Dartmouth ’71) who was a clear leader and my “right hand man”, Dereka’s sister Tammy Smith, Martina Cook, Ford Daley, Lynn and Mark Hebenstreit, and many others. I don’t remember exactly when Don Wade joined us, but he took over on the summer of 1971 when I left and has been the main consistent force behind HEADREST for the twenty-five years since.

Tammy Smith, someone else who escapes my memory, and I went on a field trip to UNH to look at their similarly planned hotline they called “Cool-Aid”. Coming back in the car we were brainstorming possible names for ourselves, and it was Tammy, possibly looking at the back of the car seat, who thought up the name “HEADREST”. It had a generic supportive meaning and had within it the slang term for an experimental hallucinogen user: “head”. (Stores in those days that sold bongs and roach clips and black light posters were called “head shops”.) And so HEADREST was named.

Feeling well enough organized we went in the Fall of 1970 to ask President Kemeny for support, and he agreed to fund us and to give us space to operate in a little room in the basement of College Hall. There we began in January 1971, manning the phones 24-hours a day, with our sensitivity and our stuffed Rolodex. Clients could also come in and talk with us on location too. As I remember it we were fairly busy, but with fewer bad drug trips and more runaways than expected. Some people called up pretending to have a drug problem who were just lonely and felt a drug problem was a needed ticket to use the service.

HEADREST’s clientele quickly went beyond the drug culture and beyond the Dartmouth community as well.

In the summer of 1971 many of the original group including myself left HEADREST for other jobs and areas, so my part of the history ends there, barely out of the delivery room, a six-month-old infant. It is my understanding that that group spawned what is now WISE and what has now become LISTEN by the way of “THE DO IT STORE”. From the very beginning until the present day, over more than twenty-five years, I believe HEADREST has been sustained by at least three enduring principles. The first is the cohesion of the group who work there, the affection, honesty, and magnetism the staff have for each other and which are nourishing through the darker times of serving the troubled public. Second is the trust in the basic goodness of human nature and the experience of life, the possibility of hope and the recovery in dire situations, the respect for natural moments of joy and success. And the third is the vision of a kinder and more compassionate human society.

Headrest supports individuals and their families, friends and neighbors affected by substance use, navigating recovery, or in crisis, by providing effective programs and treatment options that support prevention and long-term recovery. Headrest will never turn anyone away.

We imagine a world where there is no shame in getting the help you need.

Founded in 1971, Headrest is a non-profit organization with a mission to assist those affected by substance use disorder, experiencing a crisis, or in need of support by providing effective programs and treatments. We also offer support to the family members, friends, neighbors and employers of our clients.
Go to Top